My father was born in 1917, during a time when the first World War was taking a toll on many people in our nation. He survived the Spanish Flu, the world’s most deadly global health pandemic. He lived his teenage years in the midst of the Great Depression. He was drafted into the U.S. Army during World War II.

His father died of a sudden heart attack while my dad was in Basic Training. He was not granted a leave in order to attend his father’s funeral. He was shipped overseas, and straight into battle, as soon as his Basic Training was completed. He hiked endless miles in the bitter cold, and slept on the ground in the snow. He awoke, one morning, to find a large rattlesnake coiled up inside his sleeping bag.

He was in a foxhole, in Belgium, during the Battle of the Bulge, when he was hit by enemy fire. A piece of shrapnel, from an exploding bomb, entered his body at the top of his shoulder, and tore through most of his right arm. The medics were out of stretchers, so he was told he would have to walk a long distance, up a steep hill, in order to receive medical treatment. He made the attempt, but he was bleeding profusely, and lost consciousness after a few minutes.

He woke up in a medic tent, to a surgeon who told him they needed to operate in order to save his life, and he would probably lose his right arm. My dad begged the surgeon not to amputate. The surgeon promised my dad that he would do everything within his power to save his arm. The shrapnel was removed and, although he had limited use of his arm for the remainder of his life, the surgeon kept his word and did not amputate it.

As soon as my dad was stable enough to travel, he was placed on a naval ship to begin the long, slow journey back to the U.S. He spent 14 months in a military hospital, in a body cast, from his waist to his neck. He was unable to turn onto his side or stomach. He didn’t have a single visitor during the entire time. He told me, once, about a time when the Army held a Christmas dance for all of the patients in the hospital. They were loaded onto buses and transported to a dance hall, where they enjoyed live music, a meal that was much better than the hospital food, and the company of some nice women who had volunteered their time to cheer up the injured soldiers. This was toward the end of my dad’s hospital stay, and he was able to get up and move around by then, but he was the only one who remained behind. When I asked him why he didn’t attend the dance, he told me that he didn’t have any shoes to wear.

Upon release from the hospital, my dad made his way back to his hometown, only to find that his family home, along with all of his personal possessions, were gone. With nothing other than the Army-issued uniform he was wearing, and his arm still in a cast, he hitch-hiked his way from Union, KY, to Louisville. That’s where he met my mom.

This was the first 30 years of my dad’s life. I’ve been thinking about his experiences a great deal, over the past several weeks, as I sit in my home, frustrated over having to shelter in place, during the COVID-19 pandemic. The way I see it – if my dad could survive the world’s most deadly global health pandemic, the Great Depression, not being allowed to attend his father’s funeral, almost losing his life in the war, spending more than a year in a hospital with no visitors, losing his family home and all of his personal possessions, and having to start over, from scratch, on foot, to make a new life for himself – who am I to complain about the minor inconveniences occurring in my life today? 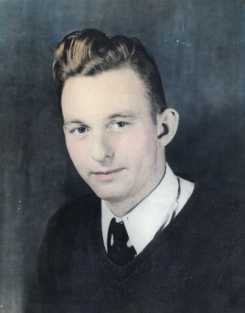