I have many wonderful memories of visiting the Daytona Beach area during my younger years. It saddens me to see that many of the old hotels have been torn down and replaced with condos. If you look close enough, however, you can still find many historic buildings and storefronts that reflect the flavor and style of vintage Florida. My daughter and I visited Daytona Beach as well as several other beaches in the vicinity during a recent mother/daughter adventure, and searching out the historic sites became the theme of our trip. We were on a quest to do Florida, old-style.

If we were going to do Florida, old-style, we had to stay in a hotel that reflected as such. We chose the Plaza Resort and Spa. It was originally built in 1888, by Charles Ballough, to serve as a large summer “cottage” for him and his family. Ballough was an architect and was the author of the book, “The Power That Heals and How to Use It.”  He, later, partnered with other businessmen to acquire surrounding properties and expanded the structure to offer an impressive hotel resort which quickly gained a reputation as a “chic winter playground for American and International travelers.” It became the first resort on the Atlantic Florida Coast to remain open year-round. Airplane pilots, including the Wright Brothers, were hired to entertain visitors who were sunning on the beach. It is a beautiful old hotel, with marble floors and stunning woodwork, but it did sustain a bit of damage from recent hurricanes and was under construction repair during our visit, which was why we were able to get a quite affordable room. We really loved the cold, fruit-infused water which was always available in the hotel lobby. 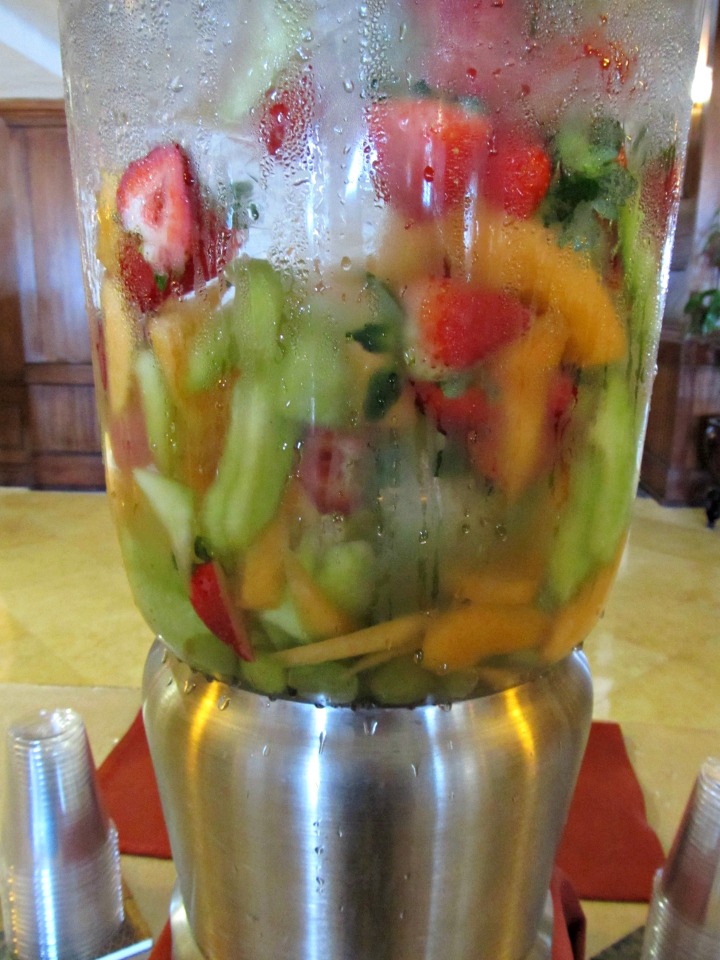 The view from our room was beautiful!

We found many reminders of “days gone by” as we explored Daytona Beach, including the rides on the Boardwalk, some vintage storefronts, and historic Beach Street, which is filled with shops, art galleries, antiques, and restaurants. But most of our time in Daytona Beach was spent on the beach!

We headed to New Smyrna Beach to visit the historic Canal Street district. Beautiful tree-lined streets are filled with an assortment of shops, art galleries, antique shops, the old Bikini Company, and much more. 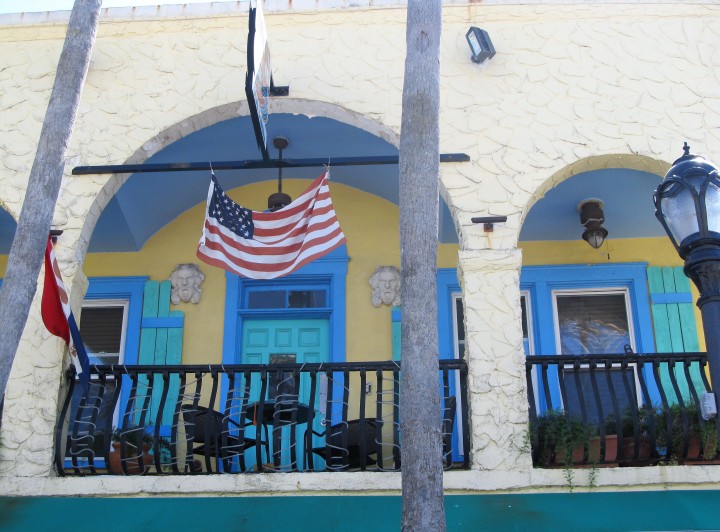 Our favorite place on Canal Street was The Little Drug Company, an old-fashioned pharmacy and soda fountain diner which was originally established in 1922. Local residents still get prescriptions filled there. Tourists love looking at the vintage decor and sampling the homemade fudge, and everyone loves having lunch or a handmade milkshake while sitting on the spinning counter stools. The large assortment of candies displayed in baskets along the checkout counters are a sweet reminder of the old penny candy days. 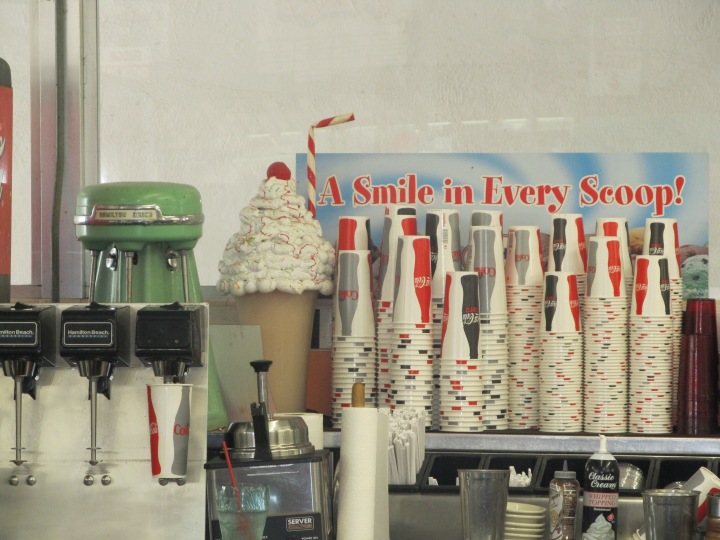 Some of our best discoveries were made on the way to and from Canal Street! We loved the Vintage Mermaid, a wonderful little antique shop with a mermaid theme. The store owners were very friendly as we browsed. We found many awesome treasures that we would have loved to purchase, but none of them would fit into our luggage for the flight back home. 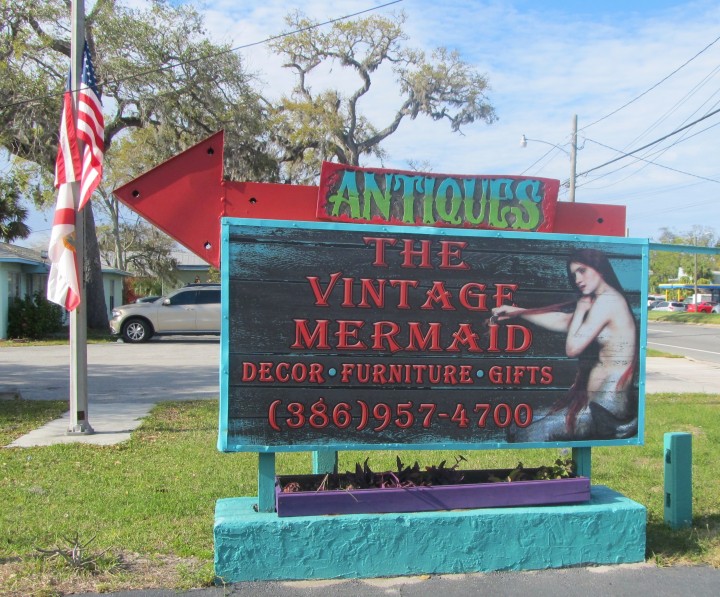 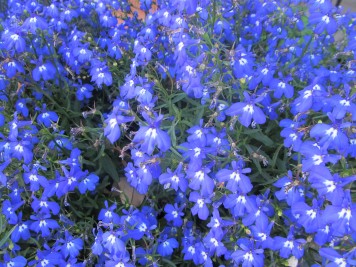 We stopped, along the way, to take photos of some vintage Shell Gas Station pumps, an old fish taco stand, and an old-fashioned Dairy Queen.  We also loved the Norwood Tree House Bar, which started out as an old Pan Am gas station and general store in 1929. 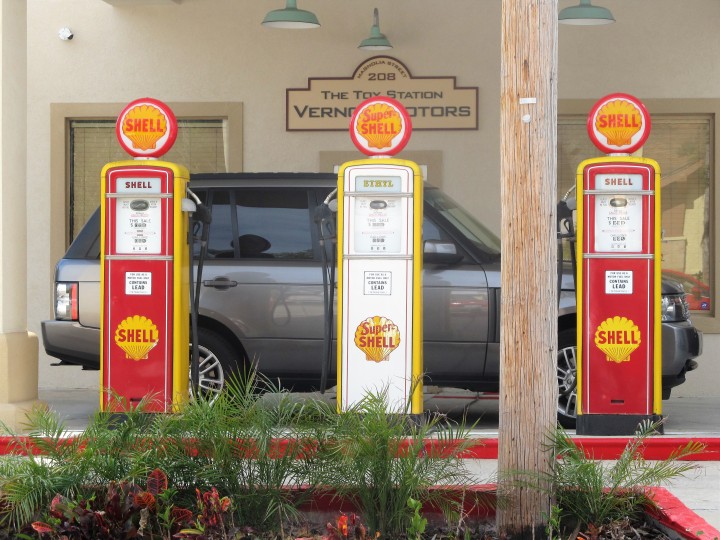 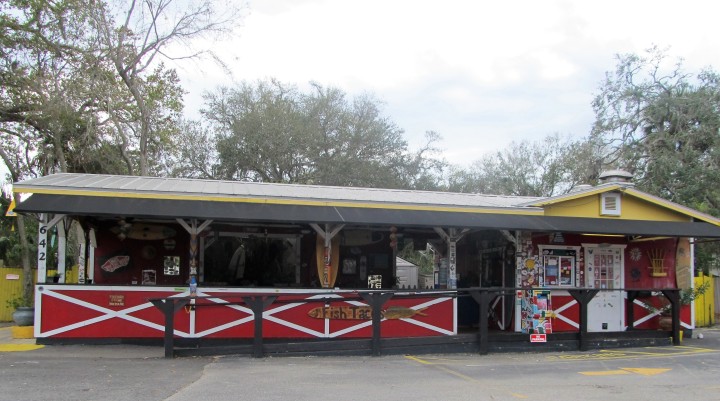 We stopped for dinner at the Outrigger Tiki Bar. We enjoyed shrimp and fried fish on the patio, while chatting with the roosters roaming about and enjoying the views of eclectic, vintage items all around.

I have driven through Ormond Beach several times, while traveling between St. Augustine and Daytona Beach. I always just assumed there was nothing much to see or do there, but we found out otherwise while searching for a unique place to eat dinner one night. My daughter and I both fell in love with this quaint little town. It became our favorite part of our trip!

We stopped into the Grind Gastropub, in Ormond,  for dinner, and the hostess asked if we’d like to sit on the deck. It was a beautiful, warm night, so we thought that was an excellent idea. We were blown away, however, when we walked out through the rear door to find a huge Kona Tiki Bar! The decor was fun and inviting, and the atmosphere was amazing. A live band was playing songs from the late 60’s and early 70’s – think Neil Diamond’s “Sweet Caroline” and early Doobie Brothers hits. The menu was so interesting that we must have spent 30 minutes reading it. All of the entrees’ had theme names. My daughter ordered “A Fish Called Wanda” – grilled fish tacos, all dressed up, and I had “Paradise By the Dashboard Lights” – meatloaf, wrapped in bacon and covered with cognac sauce. (I’m a bit embarrassed to confess that my 27-year-old daughter was a few seconds quicker than me to catch on about the meatloaf connection, considering that album was extremely popular when I was a teenager!) The food was delicious, and the entire evening was such a fun experience. 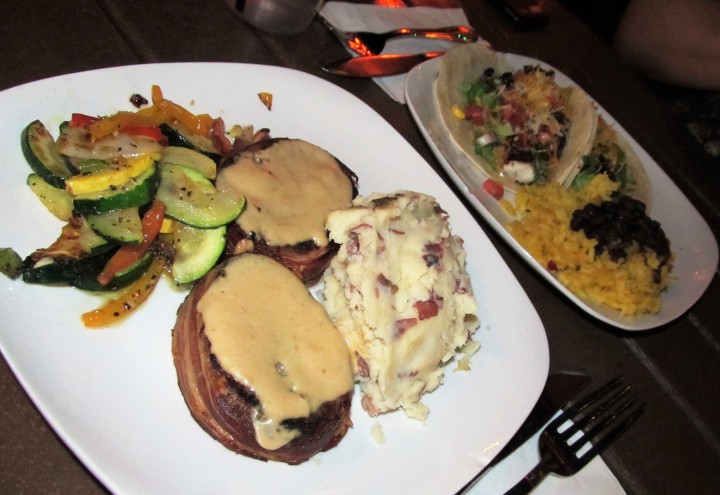 We walked around after dinner, taking some photos of interesting buildings, when we came upon this adorable little gazebo and courtyard which was connected to another restaurant. It looked so amazing that we decided to try it the next day, for lunch. 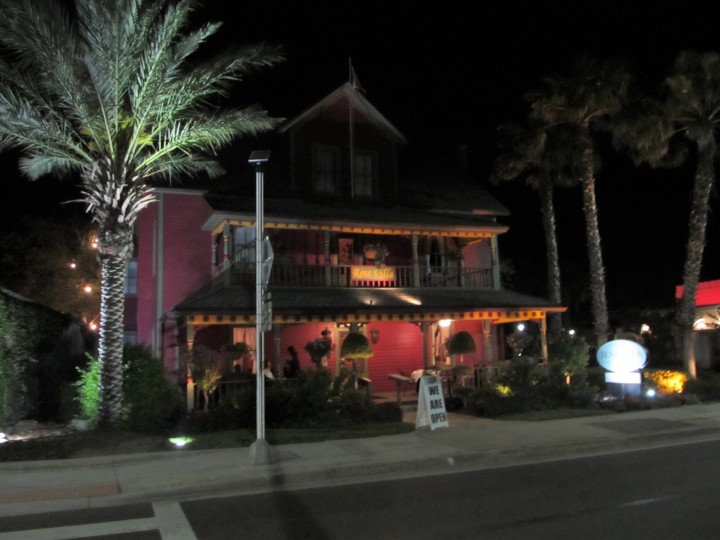 We returned to Ormond Beach the next day, for lunch at the RoseVilla – originally built in the late 1800’s as a bed and breakfast and private restaurant for the rich and famous.

We started with fried green tomatoes topped with lobster – by far the most delicious thing we ate on this trip!

RoseVilla’s southern-style fried shrimp and chicken were also amazing, served with the best fries we’ve ever tasted and grilled biscuits with honey butter.

How can one pass a bakery with a sign that reads “Food Network’s ‘Cake Wars’ Winner” and not stop to see and taste the “Champion” of cakes? So we made one last stop in Ormond Beach, on the last day of our trip, to sample some award-winning sweet treats at the Cakery Creation. The owner wasn’t in the shop during our stop, but the young lady who was working was kind enough to let us take some photographs of the beautiful baked creations, which included a 50-layer “pancakes” cake, mermaid cake pops, and an assortment of mouth-watering cupcakes. 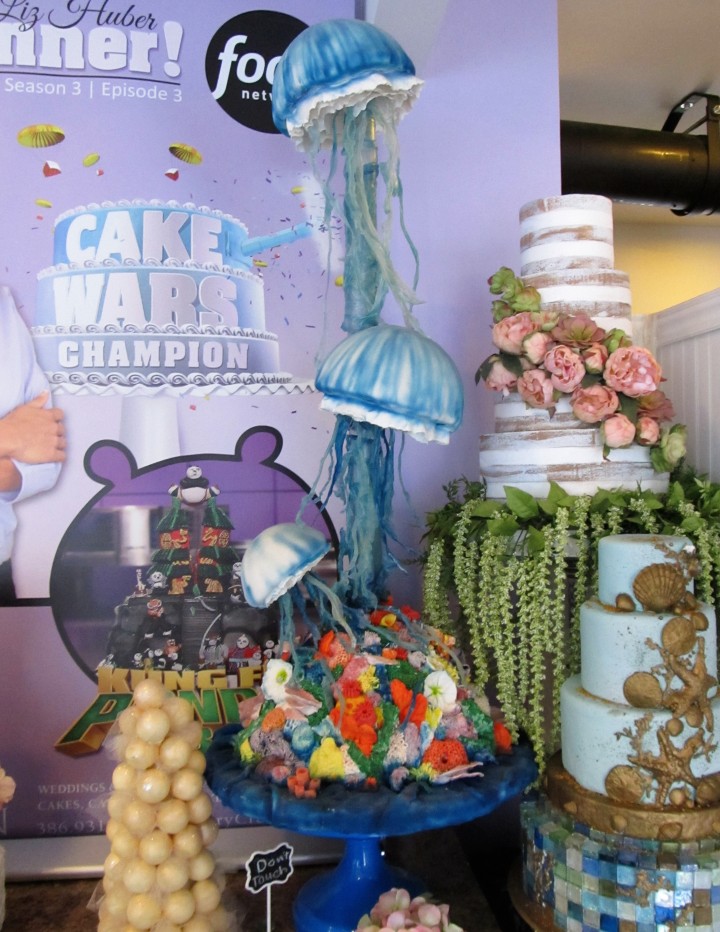 We purchased some cupcakes, deciding on the chocolate ganache, coconut cream, pink vanilla, and cookies and cream. Worth every single calorie!

We, then, popped into the Gold Leaf Coffee Shop next door for some iced tea. It was a fun shop with a little art gallery in the back, but I was a little bit creeped out by Clark Gable staring at me in the restroom. (My daughter asked who Clark Gable was, and I felt old.)

After spending a few days on Daytona Beach with a lot of college kids on Spring Break, Flagler Beach proved to be a wonderful, serene experience for a day of sunning and watching the surfers catch the waves.

The weather was perfect and the waves were beautiful. We also found some fun retro places in Flagler Beach, including an old ice cream shop the had been converted into a juice cafe and a barbecue place with colorful picnic tables. 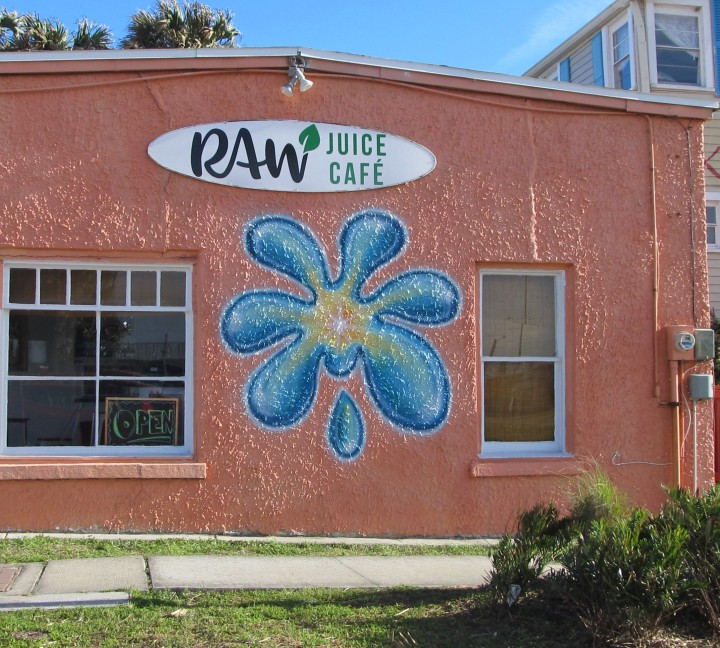 It was time to say “goodbye” to the beaches, for now, but we sure had fun doing Florida, old-style. We even found a “vintage” house to buy, in the event we are able to convince my husband to move us there! Probably just needs a little paint. 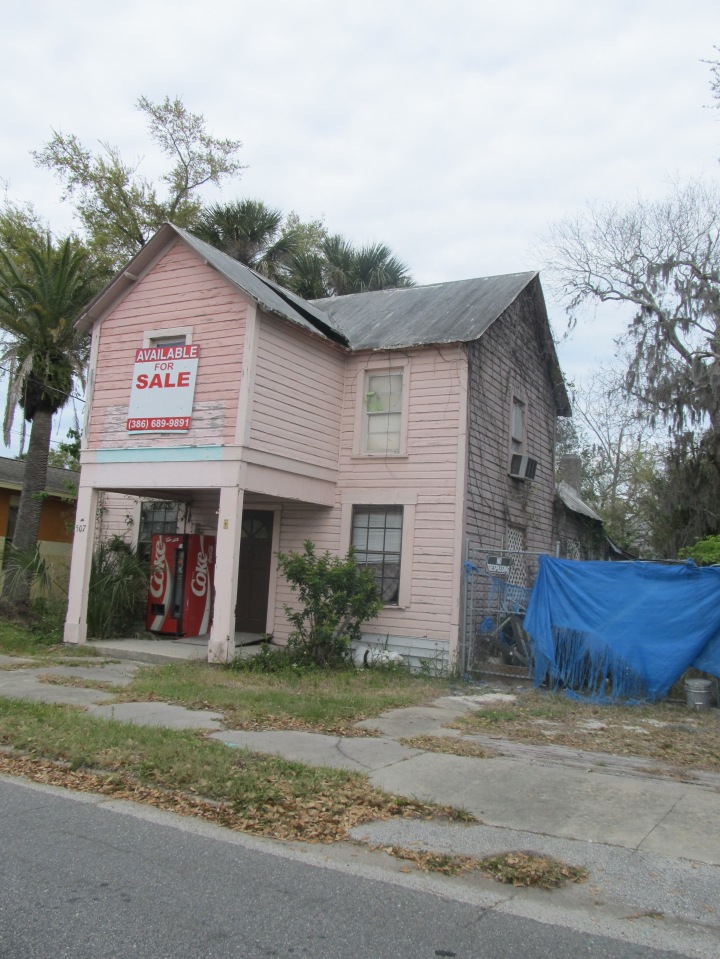